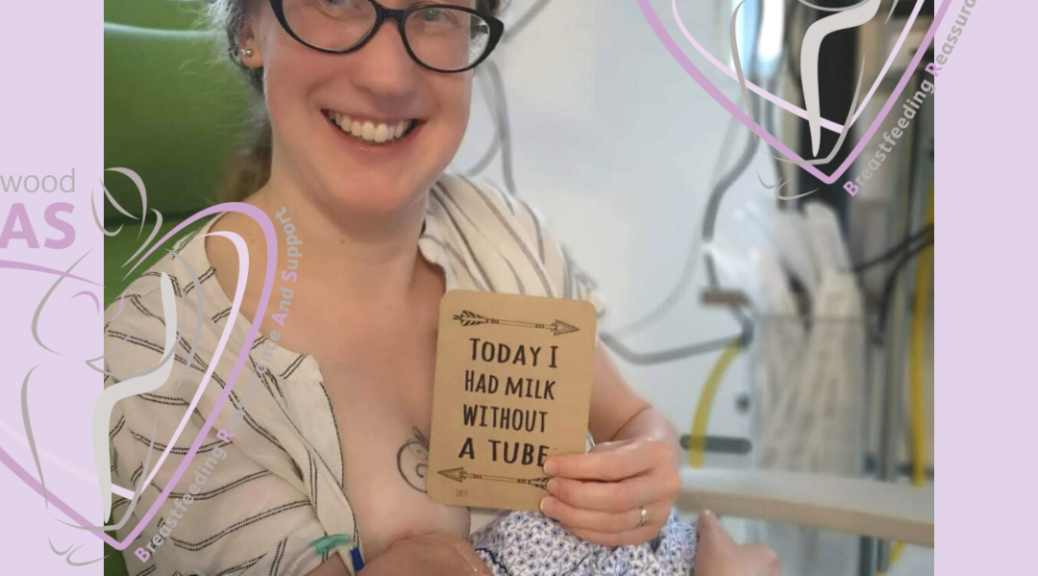 Sometimes things don’t quite go as we expect when we’re expecting, and babies can be born early for all sorts of reasons. Our peer supporter Kat, was 22 weeks pregnant with her third baby in October 2019 when things started to go a little off course.

Kat, can you tell us a little bit about what happened during your pregnancy and when your baby was born?

Towards the end of my second trimester, my waters broke (known as PPROM ‘preterm premature rupture of membranes’) which was a shock. I stayed in the hospital for a few days, had a course of antibiotics and then was told to go home and rest. Sometimes, with early breaking of waters, babies continue growing fine until 30+ weeks so that’s what we were hoping for. However, at 26 weeks I began bleeding and I was readmitted to the hospital. A few days later I went into spontaneous labour and little Olive Hannah was born. She was 27.5 weeks gestation weighing just 1.12kg.

She was very tiny! What happened after that? Can such a tiny premature baby feed directly from the breast?

No, they can’t usually. Olive’s lungs were struggling due to the lack of amniotic fluid and so she needed breathing support (ventilator, CPAP and high flow) for the 10 weeks she was in the neonatal unit and in fact came home on 24hr oxygen. I breastfed my first two babies and felt determined that nothing was going to stop me from giving breastmilk to Olive. Premature babies are also at higher risk of infections and so if they can receive breastmilk it’s really beneficial.

I started bringing in my milk supply to give to Olive through her nasogastric tube. It felt overwhelming to be responsible for tricking my body into thinking that there was a baby feeding. With everything that happened, with the birth, I didn’t even begin expressing until 24hrs after she was born. We would usually say to begin expressing within a few hours after birth, but it goes to show how intense everything can be having a premature baby.

Over the next few days, I spent most of my time concentrating on hand expressing colostrum for her. It was such tiny amounts but I whooped with joy the first time I saw milk. Often parents of premature babies can feel really helpless. Olive was so poorly in the beginning that she didn’t ‘need’ us in the way a baby would usually need her parents. This was quite hard to process. However, focussing on expressing milk was a way I could know that I was still caring for her and providing for her.

How long did you express for, before Olive could breastfeed?

Once my milk began to ‘come in’ after a few days I got into a routine of expressing at least 8 times every day (including once before and once after midnight.) I got an electric double pump (though you can hire, usually with a discount for having a NICU baby), and I used the hospital’s breast pumps when I was there. I got a hands free bra-top so I could care for my other two children, use my phone, drink tea etc. while expressing. This made a big difference to the sustainability of expressing! It wasn’t easy; it was repetitive and boring. I particularly found it hard overnight. This was often when it hit home that I didn’t have my baby. I am grateful for the support and encouragement of friends and family, who kept me going and of course little Olive who got my milk every day. It was all for her.

When she reached about 34 weeks gestation (7 weeks old) she began to show signs of rooting and wanting to suckle, so at this point, I started putting her to my breast. She was so tiny. It wasn’t easy to hold her and her high flow breathing tube was heavy, so I had help to lift her out of the incubator. She could latch quite well, but it was a good few weeks before she was ready to feed. At this stage it was just about practising suckling, tasting a little bit of milk and building up positive associations around being at the breast. I used to try and do her tube feed while she had her mouth at my nipple, which was a bit of a juggling act!

Kat had to express 8-10 times every day! So being able to express on the go, was essential. Here she is wearing a double pumping bra and pumping in the car!

Can you tell us a bit about the process of then transitioning Olive from being fully tube fed to being breastfed?

In some ways, this was the most difficult part. We had to balance allowing Olive to use her natural instincts to feed (she’d been having a set amount of milk at set times for weeks) with the fact that she was still very small and weak, so she couldn’t take in enough milk to satisfy her needs. We started by spacing out her tube feeds, so she had longer to begin to get hungry. I tried to be at the unit even more, to try feeding her as often as I could. I found that a lot of responsibility for how well she’d fed lay with me; the nurses would ask if she’d had a ‘full feed’ and somehow I had to figure out if she had! Even with my peer support knowledge and having breastfed two full-term babies, I found this tricky to negotiate. The key thing is not to rush, which is easier said than done because we got to the point where all that we were waiting for was feeding to be established, so we could come home. After 10 weeks of living between home and NICU, we were ready to get out of there!

Another thing that I found difficult was having to reduce the amount of milk I was producing as I’d been expressing more than she needed. The process of becoming in tune with her feeds was quite difficult and at times painful as my breasts were very full. Slowly, over a few weeks, Olive began to feed more from me and we reduced the ng-feeds so that she came home from the neonatal unit without the tube. Breast compressions became my best friend! They were an invaluable tool to encourage my tiny baby to continue feeding and helped get as much milk into her as possible. Now she’s 14 months old and breastfeeding is our favourite thing.

The end result of a lot of hard work and determination. Breastfeeding a premature baby is a marathon, not a sprint!

Thank you so much, Kat, for sharing your story! What is one thing you’d say to any family that has a premature baby and wants to breastfeed?

The one thing I’d say is to get support. Get support expressing that first milk. Get support setting up a daily expressing routine. Get support maintaining the expressing. Get support transitioning to the breast. Get support establishing breastfeeding. Each step has its own challenges and there are people out there (like the Charnwood Bras!) who can help and lots of options to explore such as cup feeds, supplementary nursing systems etc. You don’t have to figure it out on your own!

More information and support can be found here:

Establishing a milk supply with a pump

Transitioning a premature baby to the breast